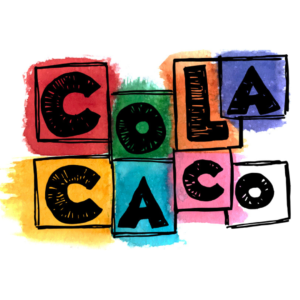 Since 2013.
The COLA CACO is an EDUCATIONAL & ARTISTIC PROGRAM based on ENVIRONMENTAL ISSUES using the ART of MOSAIC with up-cycled material.

Originally from Rio de Janeiro, Brasil, where we all live close to the ‘favelas’ reality, I feel personally touched by the fact of how Rio’s favelas expose the FRAGMENTED SOCIETY in which we live nowadays. The reflection proposed in this project is how the favelas are naturally a large visual mosaic also representing a social fragmentation – where each small group lives in isolation. It reflects also for all over the city. People are living in isolated fragments instead of an harmonious society as it should be.

Nowadays, living in Europe, specifically in Italy, the project remains with the purpose to create a conversation about the borders (sometimes invisible). The mosaics here also represents the concept of RECONSTRUCTION and (RE)CONCILIATION among the fragmented parts of the society.

PROJECT GOALS:
Provide RECREATION through art and information about ENVIRONMENTAL ISSUES based on a PEDAGOGICAL program;
Create cultural connection on communities.

METHODOLOGY:
We start with the mosaic WORKSHOPS using up-cycled material: mainly plastic from packeging and credit cards.
Step by step, we develop a creative journey to create a collective and collaborative mosaic art connecting different realities through a Social Responsibility project.

EXPERIENCE:
From 2013 to 2017, in BRASIL (Rio de Janeiro and São Paulo) this project was launched and developed as a proof of concept.
The group created different murals in communities with children and young people.
In 2018, 2019 and 2022 the project was developed with communities in Italy.

[2022] – Venice, Italy
The objective was to offer a creative workshop for the associates from the Arco Acuto Association. To reinforce cultural exchange with the NGO they support in Brasil, the Colonia Venezia.
The theme is “CARNIVAL” inspired by the cultural connetion on the both places: Venice and Brasil 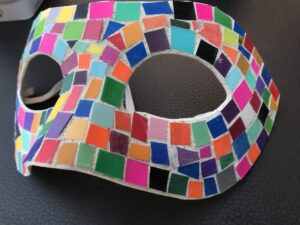 [2019] – ROMA
Asinitas – Centri interculturali con i migranti
2 days workshop using plastic packeging
50 women from 15 countries (among the participants, teachers, director and staff – including me) with 9 different native languages were united by the
ITALIAN LANGUAGE in this occasion. In collaboration with the Italian language teacher, we decided to work with the theme “HOUSE”. The participants were invited to share their feelings about a house artistically represent it – whatever it meant for each of them – with the mosaics. In this way, we created a social environment aiming in the development of their current social aspect and conditions.

[2019] – ROMA
American Express Italy Office
4 hours workshop using plastic packeging
Nearly 100 Staffs´ kids during the event
“NO PLASTIC DAY CHALLENGE” inside the office in Rome. From the plastic lids to the mosaic = this is the way we did to explain the kids how dangerous the plastic rubbish can be and they shouldn´t finish at the sea.

[2018] – VENEZIA
Palazzo Cavalli Franchetti
During the Venetian version of the ART NIGHT and invited by the Istituto Europeo di Design, we developed a live performance with up-cycled corks and plastic lids representing  the map of Venice, called as “What do you leave behind?” Over 700 people passed by the event and were invited to collaborate and interact with this piece.

[2013 – 2017] – BRASIL
During 4 years, this project was running in Brasil as my second professioal activity. I managed some collective urban instalations in 2 cities and workshops:
Rio de Janeiro: the group worked in 3 ‘favelas’ (colaborating with the community), 1 enviromental event in RJ, 1 private company and 3 schools.
Queluz (São Paulo): during 4 days full time, the group worked in partnership with the city hall.